If you have a Pug, there’s a chance you’ve wondered “do Pugs need another dog companion?” Especially, if you leave your Pug at home alone during the day. Mindy my black Pug had a dog companion and I wanted to share what I learned about finding the best buddy for your best friend.

Do Pugs Need Another Dog Companion?

The answer is it depends, all dogs are different and all dogs have different dispositions and social preferences. Pugs need their people, but after living with a Pug for 16 years, I don’t believe that all dogs require the companionship of other dogs.

Mindy lived with a Yellow Lab for about 10 years of her life. When our Yellow Lab Charlotte passed, we decided not to get a second dog. We had no clue how Mindy would react after losing her playmate.

It took a while for her to get over the loss, but eventually, she was fine. It as if she was the only dog we ever had. The downside is that she seemed a little needier sometimes.

If you’re considering getting a second dog for your Pug, let’s take a look at which types work the best.

Do Dogs Get Lonely Being The Only Dog

Yes, Pugs can get lonely they are social animals that crave attention from their humans. It’s no different than humans, we crave social interactions with other people.

According to Petfinder dogs share a common bond and provide companionship that humans just cannot provide. It’s no different than women confiding in other women because sometimes men just can’t understand women issues.

In fact, it’s not uncommon for Pugs to suffer from separation anxiety. If you do leave your Pug alone during the day, make sure that you’re giving them access to their favorite toys and a quality dog bed they can lay on while you’re away.

Here’s a list of some of Mindy’s favorite toys for a Pug that kept her busy while we were away at work.

Best Companion for A Pug But Not Good With Kids

While most Pugs are laid back and can get along with other dogs, cats, and kids. We’ll take a look at some of the best dogs dog breeds that get along with each other.

According to the AKC American Dog Kennel, and my personal experience, Pugs are low-tempered and are generally easy to get along with. As long as you’ve taken the time to socialize and train your pup.

However, there are some breeds that are more suitable for this breed than others. Avoid pairing your Pug with a high-energy dog or one that is prone to be aggressive.

While these dog breeds may get along with your Pug, they are the worst breeds for families with kids.

While these breeds may make great pets, but according to PetHelpful, most of these dogs are mean due to poor treatment and bad breeding.

Of course, you can consider getting a second Pug. I’ll share some tips on how to introduce them properly below.

What Dogs Are Good With Pugs?

The best characteristics to look for when pairing your Pug with another dog is to look for a happy-go-lucky breed and has a low-stamina like a Pug.

You may also want to consider a small dog so your Pug won’t get hurt when they are playing. Although, Mindy lived with a Yellow Labrador and never got hurt when they played.

It’s important to remember that your Pug is susceptible to genetic problems such as luxating patellas, protruding eyeballs, and breathing problems. A larger dog that weighs 20 – 30 pounds more can inflict injuries when rough playing.

These dogs will make great playmates and companion dogs for Fido.

These are outgoing dogs with a happy-go-lucky nature. They tend to have the same type of personality as a Pug and should get along great with each other.

Studies have shown that dogs with the same personality stand a better chance to get along with each other.

Your Pug’s trusting nature may not do well with a Chihuahua that is known to have a protective nature.

Will Two Male Pugs Get Along?

If you decide to get a second Pug as a companion for your current Pug. You’ll do best if you can get them as puppies from the same litter.

Pug puppies that grow up together have a better chance of getting along than trying to introduce them when they become older. The downside is that house training two puppies can be tricky.

I’ve personally NEVER had a male Pug. However, after doing some research, dogs of the opposite sex tend to do better together. Two females shouldn’t have any issues getting along together.

Mindy and Charlotte never had any issues of getting along.

Male Pugs are known to be laid back once they get past their juvenile age, which is around the 12-month mark. 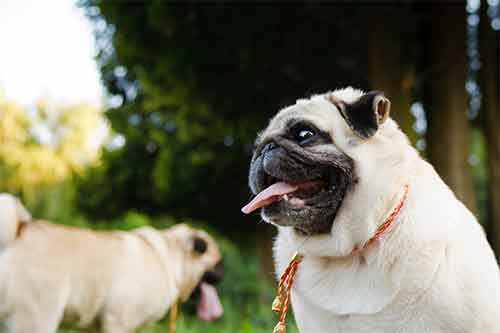 Here is the best way to introduce two male Pugs or any other type of male dog.

Use a harness on both dogs: This will give you complete control in case one of the dogs tries to start a fight.

Take them to a neutral park, such as a public park: This way there are no scents of the other dog.

Take the dogs for a walk together: Walk the dogs in a single file and don’t allow them to sniff each other. When dogs approach each other for the first time, their emotional intensity is extremely high.

If one pees, let the other dog sniff it after the dog is done: Dogs sniff urine and poop as a way to exchange information and energy between the two dogs. Once the dogs are comfortable to urinate in front of each other, that’s a good sign that they are starting to get used to each other.

Show them the same amount of love: If you’ve had a Pug since they were a puppy, and bring home a second Pug. There can be feelings of jealousy if you favor one dog over another.

It’s no different than spoiling one kid over another.

Separate toys, food and water bowls: If you notice any aggressive behavior, you may want to keep food bowls, crates, toys, and etc separate.

Don’t leave them alone together: At least until you know they won’t get into fights or hurt each other.

Most Pugs will be fine as long as you give them the attention and affection they require. If you do get them a companion, make sure you choose one that will get along with your current dog.

Related Articles To Before You Rescue or Buy A Pug

Do Pugs Get Along With Cats?

Pug Behavior Issues You Should Know About

Petfinder – Dogs Who Are Home All Day

I had a black pug for over 16 years. Black Pug site is a website where I share things about my black Pug, as well as the ultimate resource for caring, raising, and learning everything about the Pug dog, or information if you’re trying to decide if it’s the right breed for you.

Black Pug Site is a participant in the Amazon Services LLC Associates Program, an affiliate advertising program designed to provide a means for sites to earn advertising fees by advertising and linking to Amazon.com. Black Pug Site is compensated for referring traffic and business to this company.This website is for informational purposes only. Contact your veterinarian for any medical questions.

Do NOT follow this link or you will be banned from the site!