Home » Behavior » Why Do Pugs Act Like Cats? What Causes the Behavior?

Have you ever noticed your dog perched on the arm of the couch? Lying ready to pounce? Ready to chase laser lights or laser dots alongside your cat? Walk or stand on your like a piece of furniture? So why do Pugs act like cats? Let’s take a closer look at this behavior and the reasons your dog acts like a cat.

If you have an indoor cat, likely your Pug has picked up its behaviors from your feline friend. Pugs are not the most energetic dogs, so it’s normal for them to lay in the sun or perch on top of the couch like a cat. Some dogs regardless of the breed are naturally inclined to act like cats. Although some breeds such as Greyhounds, Poodles, Basenji, and etc are more cat-like than other breeds. Rest assured, your dog won’t suddenly start eating cat food and show you no love or interest.

But it’s normal to worry about your dog’s behavior, especially, if you’re not a cat person. Or you thought you were getting a dog, now they act more like your cat than a dog. 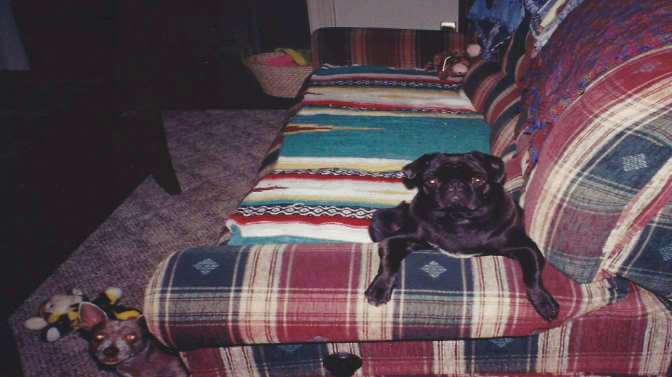 Let’s take a closer look at what causes this behavior and what to expect.

You Have A Cat In The Home

Chances are your dog has mimicked some behaviors from your feline friend. Remember that childhood saying “Monkey see, monkey do”? It came about because of how easy it is for children to learn through observational learning.

According to Kylie Rymanowicz, children learn and imitate behaviors by watching or listening to others. That’s why as parents, we have to watch what we say around our children, especially, if we don’t want them picking up our bad habits.

This goes true with your pets. If your Pug isn’t socialized around other dogs or lives with only cats, it’s normal for them to pick up on behaviors they see a cat doing. Especially, if the behavior is likely followed by food or behavior. The opposite is true as well, your cat may pick up some of your dog’s behaviors as well.

Having a Pug and cat live together, doesn’t necessarily mean your dog will do everything your cat does, like jump on counters, purr, knead your furniture, or groom themselves excessively.

But they may likely mimick some behaviors after cohabitation with a cat. For instance, if your dog notices your cat always lying on the arm of the couch, or on the top of the couch. They may try it and realize that’s their new favorite spot in the house.

If your cat is constantly lying on your lap, and gets petted for a long time. The next time you sit on the couch or lie on the floor, your dog will likely climb on top of you because they know it will get them attention. (monkey see monkey do!)

The more your dog sees your cat doing it, they’ll be tempted to try it as well.

What Does It Mean if Your Pug Acts Like A Cat?

Don’t worry, it doesn’t mean that your Pug is going to pick up on the cat qualities. Pugs are companion dogs and enjoy being around people. Your dog will still likely follow you around like a shadow.

You’ll still likely get snuggles and doggie kisses everyday, especially, if your Pug is that kind of dog. It just means that your dog will have some qualities like independence (when you’re not home), which can be a good thing.

You likely won’t have to worry about your dog jumping on counters, as Pugs can’t jump that high. However, they may try jumping our couches, bed, coffee table or any furniture they can access when you’re not looking.

If you notice your dog doing any unwanted cat behaviors such as climbing on your dining room table or perching itself on your expensive couch, you’ll want to put a stop to the behavior immediately.

The biggest difference between cats and dogs is dogs are much more trainable. It will take some time, especially, if your dog sees your cat continually doing those same behaviors. It’s best to try to train your cat to stay off your furniture and kitchen counters, so your dog understands it’s not allowed. In the past, people used to spray cats with water to keep them off the counter.

However, according to feline behavior solutions, cats can associate the unpleasant experience of being sprayed with water with you, not the punishment itself. What works for your cat won’t work for your dog, so, it’s important you learn how to train both your cat and your dog properly.

Both cats and dogs can make great pets, and Pugs get along well with them. That being said, it’s up to the pet owner to instill the behaviors allowed in the home. Ignoring unwanted behavior can lead to a situation where your dog thinks they are the alpha in the home.

This could lead to bigger problems such as your Pug growling at you when you get near its food or toys. An alpha dog will try to control you, by keeping you away from its possessions.

There are some bad qualities such as skittishness, eating all the time, and moodiness, you don’t want to rub off on your Pug. Well, don’t worry, it’s likely not going to happen.

Pugs are prone to eating a lot, so ensure you keep your cat’s food in a high spot where they can’t reach. Especially, since Pugs can’t eat cat food.

As for the skittishness and moodiness, Pugs are a lovable breed that enjoy being around people. Even if you have a grumpy cat like a Persian or a Ragdoll, their grumpiness won’t rub off on your pup.

However, the happy go lucky attitude of your Pug will likely irritate your cat, especially, if you have a hyper puppy. So keep an eye out for your cat teaching your Pug not to bother them with a slap on the head.

A Pug acting like a cat isn’t always a bad thing. They can learn some independence, which is a good thing, especially, if you spend time away from home. Vice versa, your cat will also pick up on some behaviors from your dog and can make them more lovable than before they were exposed to the cat.

If your dog picks up any unwanted behavior, put a stop to it immediately and train them to know what’s allowed and what isn’t.

Pugs and cats can live in harmony and when living together, you should some behaviors to rub off on each other. If your Pug acts like a cat, it’s not the end of the world. Just like the lyrics in the popular Disney Film The Aristocats.

Everybody wants to be a cat. Because a cat’s the only cat Who knows where it’s at!

What Are You Looking For?

I had a black pug for over 16 years. Black Pug site is a website where I share things about my black Pug, as well as the ultimate resource for caring, raising, and learning everything about the Pug dog, or information if you’re trying to decide if it’s the right breed for you.

Black Pug Site is a participant in the Amazon Services LLC Associates Program, an affiliate advertising program designed to provide a means for sites to earn advertising fees by advertising and linking to Amazon.com. Black Pug Site is compensated for referring traffic and business to this company.This website is for informational purposes only. Contact your veterinarian for any medical questions.